I am so sad to leave Durango.

After driving that exhausting 45 minute drive from Mesa Verde, we arrived at Westerly RV Park and was greeted by Cook (yes, his name is Cook).  Really nice, I set up and went to check in and talk to him, it was fun, learned so much about him and he gave me a couple hints about what to do, see, etc.  This is really active, he was telling me about a backpacking trip he was planning on taking in a couple weeks, he is in a band or two that play a bunch of places and a bunch more stuff, he asked if I wanted to go to his favorite brewery as I mentioned I liked beer.  I said sure, and we set Friday night, always depending on how tired I was though.  By the end of the conversation we were talking about age and he said he just turned 70 a couple weeks ago. I knew he was older but I wouldn’t say that much older (and don’t worry, I wasn’t think of him romantically, just cause he was so active).  He thought I was in my mid-30s, when I corrected him, he was surprised then within the conversation I told him my mom was 70… His look went from, hmm she is a little young,  to wow I could be her father…

The next day, we went on Million Dollar Highway (Durango to Ouray through Silverton).  Wow, that was an amazing drive.  Cook said to do the drive rather than the train and Sofie loved it.  There was still snow on the ground so she was loving jumping in and out of it, running and all.  We went through some summit passes that were just breathtaking.  Here are a couple pictures from it.

We didn’t really stop in Silverton, it was a bit early for lunch, it looked cute and just not too dog friendly.

By the time we arrived in Ouray, it was lunch time and we found this great little burger place where Sofie could sit out with me. The sun was shinning and it was just beautiful.  I couldn’t have felt more content.  After lunch, I thought of going on a couple hiking trails out here, so we went to Lower Crescent Falls and Baby Bath-bowls… I think Sofie found her spot with this altitude, she was in front of me the whole time, trying to hurry me up… I am panting of course cause we are at about 7600 elevation…. 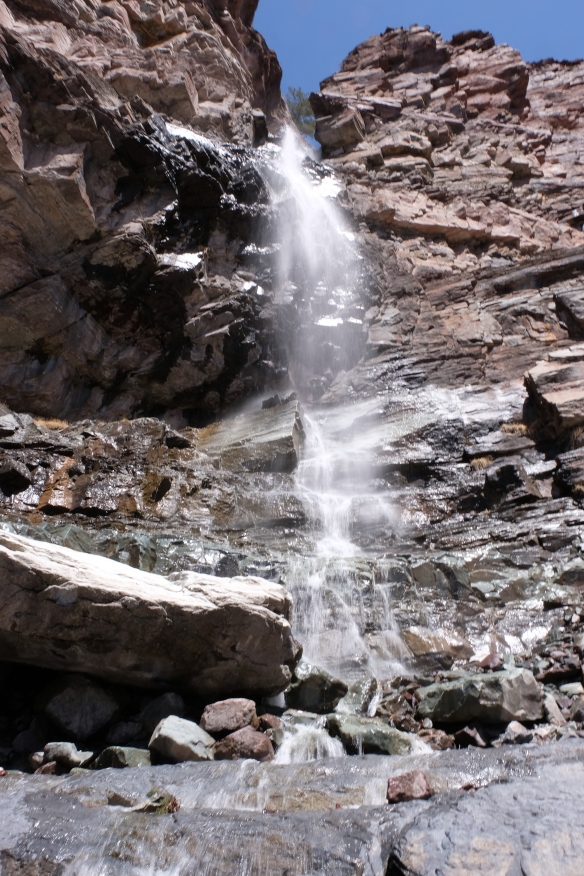 The next day, I decided to just hang around Durango and see what was here. Instead of paying 42 bucks for a sitter for Sofie, I brought her with me, called my sister to wish her a happy birthday, found a dog park where she can run in the Animas River and play with so many other dogs.  After that, we went to another recommendation from Cook to a lunch place.  Then headed to another hiking trail which was a little deceiving.  It was Havalis Lake Trail, and the trail was going around a mountain next to the lake, we never saw the lake on this trail.  No matter, Sofie was loving it, and we relaxed by the lake at the end of it.

So it was night before I was supposed to leave, I saw no sign of Cook so I figured, no going for a beer, which was fine cause I had already had one and was feeling it.  The night was good, I had packed up most of my stuff to leave and was ready.

The next morning, I am packing up, dumping the ugly waters, messing with the water hose which every time I tell myself, I have to get a better solution for stowing this and then I drain my toilet to make sure no water in in the piping and notice, the flush was different.  So I decided, its earlier than I planned to leave, let me fix this real quick.  Well without getting into gross detail, I decided to stay another night as nothing was working… Had to call Roto-Rooter and luckily I fixed it before having to pay for a dispatch to do the same thing I did.  I called the dealer where I bought my trailer and asked if they had encountered this problem before, they had and told me how to fix it, and now I own an auger and I can fix things… 🙂

Unfortunately though, it was 11 am and I was exhausted just by the stress of doing what I was doing, not having a toilet to use, so I was driving across the main highway to the grocery store every time I had to tinkle… After going to Office Depot to finish a print out, I walked into Wal-Mart and found an amazing aisle… Bronco crap – everywhere… I was in a happy place…

Finally getting back, I spoke with another neighbor and she recommended I go to the Hot Springs across the street.  I wanted to go before, just didn’t; I wanted a massage but then told myself you are unemployed, you don’t need to spend the money!!! That all went out the door after the morning I had.  Looking down, I needed a shower cause somehow I also had grease all over me, no idea how I did that, but it was there – on my legs, my calves; my forearm, even my forehead… Laughing a little cause apparently I looked exactly like that in Office Depot and Wal-Mart and no one looked or said anything weird to me…  I locked Sofie up in the trailer, praying she didn’t destroy it, and walked over to shower and soak.  While talking to the people, I noticed the hot stone massages were 50% off and another 10 bucks today only special… So I booked a 4:45 and went to shower and soak for 30 min. 🙂

That night, I thought back in the day, and as horribly wrong as the morning had been, it was on purpose, I wasn’t meant to leave on Saturday… If I had, I would have not have found my Broncos lap blanket I am snuggled in right now, I wouldn’t have sent my tax papers in or experienced the wonderful hot springs there which felt like it just rejuvenated me and that night, I slept like a baby.

Now I am ready to venture off to New Mexico.