I can’t believe it already has been two days since I left here. Mesa Verde was on purpose and slightly a mistake at the same time… The on purpose part was that Papa suggested I go and check it out as he knew I would like it (we went when we were younger).  The mistake part was, when I was making the Durango RV Park reservations, I was driving and was staying in Natural Bridges – so the cell service was less then ok.  So, when the lady asked which days I wanted to stay, I said the 25th not knowing which day that was, I reserved Wednesday – Saturday and not Sunday – Wednesday… Which meant, I was staying in Mesa Verde (36 miles from Durango) for three nights to make up the difference.  A good mistake… 🙂   Guess I really should pay attention to the date and days…

I feel kinda bad, but not really. My drive from Natural Bridges was about 130 miles (2 hours) and then my drive from Mesa Verde to Durango (46 miles) was about an hour including getting gas… Oh well, I feel like I will have some days where I will have to make the long drives, so I can’t complain then, which I probably will anyway.

The Mesa Verde RV Park though, I can’t say enough about it, the site management were great, they guided me to my spot and helped me back up that 5 feet I needed to not hit a tree which apparently is a bad thing… He of course had to tell me to turn my wheels the other way… and then adjusted a couple times and then finally I was in my spot.  🙂 Since I had been traveling about a month and have no idea about how much propane I still had, he filled them up for me (2.5 gallons with both 5 gallon tanks)  I guess I haven’t been using as much as I thought.

After a couple hours of me being there, I decided to do laundry, the bag was heavy so the site manager went and got his golf cart, drove my laundry to the building – so nice.  I noticed the son (24 yrs old) was helping out, by 3 pm I could smell the beer (Coors) on him. While I was doing laundry I could hear him talking to his mom (site manager’s wife) and it was just funny… Oh to be 24… After a couple more hours, I could tell he kept drinking, he came over and was playing with Sofie. It was fun, talking to a young kid reminded me of talking to my nephews, refreshing.   He apparently is a big deal out here in Durango, tours with a band as the singer and all.  Looking him up in Facebook, he wasn’t making it up!  It was great talking with him and he helped me with a couple things just cause he was just a sweetheart like my nephews!  Missing my nephews!

Since I wasn’t able to bring Sofie on any Mesa Verde park trails, I left her in the crate and took an adventure tour, the way the Ranger described it, I thought I needed to be certified in rock climbing… This was kinda the jist of it (paraphrasing): “Ok, this is our adventure tour, in this tour you will be climbing a 32 foot ladder with no supports, (eyes get wide) then you will be in a place where the Pueblo tribe lived hundreds of years ago, sacred land.  Then after about 30 min, you will have to go through two tiny tunnels about 2.5 feet wide and about 3 feet tall, so if you are claustrophobic, you will just have to breathe, and you are small enough – you should be fine getting through the tunnel – even if you have to contort yourself a little and shimmy through…  (smile) Then after the tunnel, you will be cliff side about 600 feet high with no protection and you will have another ladder, climb some stone rock with toe and foot cutouts, then another ladder 2 feet wide to climb another 20 feet… Are you interested?” – LMAO UMMM Yeah – sign me up… climbing ladders with no protection… why not!!!

As Sofie was comfortable in her crate in Harry I did the hour drive to get to the site, a lot of switchbacks and insane climbing… Waiting for the tour to begin I met a couple couples, one of them the wife was deathly afraid of heights and the other wife was 72… The husbands were the ones that signed them up… Of course.  They were so sweet, encouraging me on this trip I am taking, so while we were climbing up the ladders, the 72 year old was above me, taking her time, I was encouraging her while we were going up… It also gave me time to stop and look out, it was a good thing I wasn’t afraid, I told myself there was no need to be and I would be so happy that I did this… So I was pretty much hanging off this ladder looking out while I wait and the other wife was next to me almost freaking out, I was talking her through it, encouraging her as well, knowing she would be so proud of herself.  Both of them did so great, the 72 year old said breathless – not bad for a woman my age 🙂 She was so proud.  I loved it… Missed my mom as both of them reminded me of her. 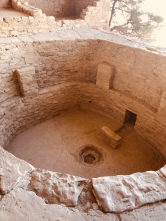 Prayer area among other uses

Was a two story 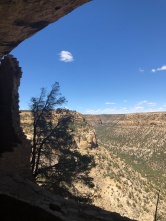 Up on top of the final ladder

Looking out –  it was breath taking, the Ranger spoke of being of Indian decent and spoke to us about how they lived, said a thankful prayer while we were there to the spirits of the Pueblo tribes.  Definitely a memorable experience.

The following day was more a rest day, WalMart run, Sofie was getting groomed (since she dove into a really stinky pond), Safeway to purchase Bronco paraphernalia, and organized my truck and Harry…

I had met one set of the neighbors there and that last night they invited me to have a drink with them. They were from northern Washington (living on an island).  She was a facilities project manager also laid off, so she understood what I was going through, she is now retired and they mentioned that their son was an IT PM as well working for SAP and would send him my information to see if he knows someone that might be able to help.  They also thought I was amazing and brave (of course) for doing this and invited me up to their island home when I get back for a visit… I tell you, the people I meet.  I do need to check one thing though, they also offered me food from what they have and they said, that is what RV’ing is all about, meeting people and giving you a part of them.  I have felt pretty bad so far, as all I have given away is some half bottles of wine and a book I finished reading cause she mentioned that she loved the author. LOL… I need to research and possibly up my game.

Now it is time to leave and the most I will miss about this RV Park is the amazing shower facilities they had… I mean, it was almost as good as my rain shower I have at home.

I really enjoyed my stay at Mesa Verde, so much to see and now it is time for Durango, CO for 3 days.

If not now? When?  ~  Keep traveling and be brave!