Wow, what a great day.  It started with my RV neighbor letting me know that he caught 10 catfish and asked if I wanted one.

So, in the morning of course I call my brother-in-law and ask him how to clean it, then had him on the phone while I was doing it with gloves on. Wow, catfish have a lot of crap in them (normal body parts) – after about 40 -45 min I finally finished filet’ing the poor thing.  Then – took a nice hot shower, that alone was worth the RV park fee. Spent a good amount of time catching up with my Papa and realized – I was supposed to be checked out by 11 and it was 10:41… Nothing like not caring about time.  As I packed up, my RV neighbors brought over homemade pickled beets which looks amazing.  Then the husband came over and said “my wife forgot to give you my life changing baked beans”… WOW –  catfish, beets and beans – dinner!!!

I did the whole 135 mile drive to Miracle Hot Springs, I parked on top of the drive and headed down, they were sold out as was the partner RV park.  I remember seeing two other sites – one looked nice clean and promising and the other, just shady! I called the first one and headed back up there… It was beautiful, the waterfalls just gushing out from the rocks… I met some great people at this site, one couple and their dog Dixie were from the area and he gave me a bit of a history lesson about the area, the geological events, everything – it was great.

The other RV neighbors were funny, I saw them earlier peaking over their site looking at my “cute” trailer.  So later while throwing the trash, I went over to say hi.  They were on a fishing trip, caught 21 yellow trout.  Inviting me to hang out and try some, I couldn’t say no.  The trout was caught hours ago – so delicious.  They loved Sofie and Sofie obliged by giving the women there lots of kisses and leaning on their legs (she still is more shy around men, I assume cause I am rarely around them… hint hint…).

I met about 4 of them (men), two were with the women on the trip and the others were just funny. After about 2 hours of talking, I decided to allow one to be friends on Facebook, he reminds me of my cousin Ritchie. What cracked me up was he was talking about his ex-wife and said: “well you know how it is with ex’s…” I laughed, I said  “actually I don’t”, he quickly looked to my hand then I explained I have never been married, then he asked – “want to let me be your first ex-husband” LMAO – I just had to laugh. And some wonder why I don’t date…

I originally planned on staying in Antelope Island State Park however changed that plan to go to maybe stay in Wells, NV. When I arrived there after 2.5 hours, I decided, maybe I will just keep going to a park near Great Basin National Park.  I looked and there seems to be some pretty cool hikes so I drove that extra 3 hours. Driving more than 4 hours is torture for me.  The highway was a 2 lane, 70 MPH. It was gusty winds so I was happy at about 55 MPH, which every 18-wheeler did not appreciate and they would get so close to me then pass me going a good 70 MPH.  I get that, however, I was not about to chance it with my life and Sofie’s – so I just listened to my audiobook and zoned everyone else out.

In the middle of a Celtic war happening in Ireland with vampires and witches and a sorcerer, I get through the mountains and passes averaging about 7700 elevation. I finally get to Baker and the RV site.  The pictures, I think might have been taken a while ago as it does not look like the website, I started leveling the trailer, tired, I started making mistakes, redo’ing things a couple times (and that is why I don’t like to drive more than 4 hours). Finally, dinner is made, wine is good and Sofie finally ate herself, I took a small walk around the area and I see the beauty in the mountains and the area. The sunset was beautiful.

Sunset from my site 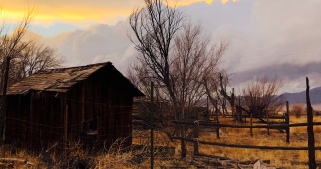 I will be here 2 nights, hope to reorganize the trailer, get rid of the stupid extra crate I have been tripping over a million times 🙂  It’s funny – getting ready for the trip, I tried to think of what I needed and what I didn’t.  Some of what I brought, somehow I don’t think I will ever use… I have a list of lessons learned and will share them at the end of this journey.